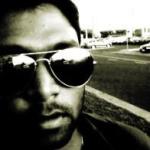 The previous night I decided to stay over at ‘The Linux Center’. After having a bad experience with Anuradha.D’s laptop and ‘Mango OS’ (where I accidentally erased his MBR, manually… , and had to recover it using Test-Disk…); I left for home at 7.00 a.m. in the morning.

There I found that i had to attend a wedding (yes another one; after all this is the wedding season…). After the wedding, I came home and caught some “shut-eye”.

In the middle of my slumber, I (am supposed to have…) got a call from Suchetha, asking me to come to the exhibition venue; which I (supposedly…) answered and went to sleep! After waking up at 7.00 p.m. My brother told me about my little “sleeping-and-call-answering” adventure, so I called Suchetha to see what had happened. Thus I found that the exhibition was not over, and practically ran (as fast as my physique permitted…) to the bus halt and caught a bus there.

At the exhibition I found Suchetha and Wasantha having dinner (beer and hotdogs.. :-D); and joined them for a bite (I had fish-rolls). After that we went in and promoted(?) SUSE Linux (since the official vendors of SUSE were the people who had invited us).

There were quite a few people who visited us, but most (all?) of them were not familiar with GNU/Linux!!!

Also during the same time, some tuxes were caught in mischeivous acts… Later I got a tour of the Apple stall, and went “gaga” over the ipods, ibooks and macs that I saw…

When I got back to the stall Wasantha started demostrating Python to me. At about 9.30 we decided to leave. On our way out we saw a dance(!!!?) going on in the next hall (but the banners hung in there were also indicating an e-carnival… :D).

Though we couldn’t promote SUSE too much, we can be happy about one thing… Our stuffed-toy-tuxes got to go out for a day! ;D